From our special correspondent:-

Spectators at the fourth Ben Williams Memorial cricket match on Sunday 5 July were treated to an epic contest between two equally matched opponents at the peak of their athletic prowess.  Away from the live broadcast tennis, captains Phil Jackson and Simon Nobes also pitted their wits in a match almost equal in its intensity and level of skill, the result being in doubt until Sam Carne-Roberts sent the second ball of the last over steepling towards the church.

Preparation for the match was marred by an unusual mistake by the groundstaff.  Following the hot and dry weather, they were asked to ensure the ground was wellwatered.  This simple instruction was misunderstood – the well has now been filled in and the water level is slowly subsiding.

Tight bowling restricted Jackson’s team to 147 from their 20 overs, competitive but achievable.  The innings was built around solid contributions from Ben Robinson and Callum Donaldson, with Jamie Richards and Alfie Nobes both bowling economically.  In reply, Nigel Williams eventually redeemed himself after the ignominy of playing out the first ever maiden in the history of these matches, bowled by the miserly Alex Green.  Richard Sabin also contributed well, before the innings of the day came from Tom Nash.  When not drumming up business for Autoglass, Tom found the water with the unerring accuracy of a seasoned member of the Grayswood Cricket Club golf tour.

A traditional Grayswood middle order collapse followed, before Jamie Richards and Sam Carne-Roberts saw their side home despite the best endeavours of Andy McAllister and Alastair Gloak.

It was good to see that relieved of the cares of captaincy, Andy McAllister and John Orr put the fielding nightmare of the previous year behind them, the former holding a stunning one-handed catch (off his own bowling, of course), and the latter’s faultless display no doubt aided by the fact that the ball seldom went near him.

As the shadows fell and the magnificent trophy was raised in front of an ecstatic crowd, we looked on at Nobby and knew that we had witnessed one of sport’s finest moments. 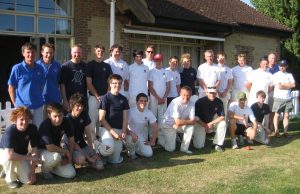